Spaghetti squash is Nature’s version of noodles. When pulled apart with a fork, the flesh naturally separates into pasta-like strands that are gluten-free, low-carb, and high in antioxidants. Because it has a mild flavor, it can easily be used as a substitute for pasta or rice in casseroles and other comfort foods.

So, what’s the best way to cook spaghetti squash? There are so many ways to prepare it. You can steam it, bake it, roast it, InstantPot it (that’s a verb now, right?), grill it, slow cook it, and more. The strands of squash inside are surprisingly versatile once cooked, but most recipes call for cooked squash as an ingredient. That’s why today I’m sharing three tried-and-true methods:

But before we cover the tutorials, a little groundwork is helpful.

Spaghetti squash is unique among other winter squash varieties in that separates into long ribbons or strands. It’s not ideal for stews – butternut squash is a better option in that case – but as I mentioned earlier it works beautifully in pastas and casseroles. Your local grocery store will likely keep this squash in stock nine months out of the year, with summer months being the period considered “out of season.” If you can’t find spaghetti squash at the store or local farmers market, feel free to pin this post to your favorite fall or winter recipes board and revisit a little later in the season.

How to Choose a Spaghetti Squash

With a hardened shell, you won’t likely notice soft spots or other telltale signs of “ripeness”. No need to shake, hug, or listen to each squash to find the best ones… but I won’t tell if you still want to.

Look for stems that are dry and tan, like cork. Also, opt for the matte finish look on the shells rather than glossy finishes. 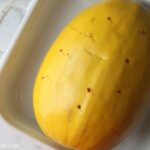 How to Bake a Whole Squash in the Oven

The most difficult thing about making spaghetti squash is cutting through the hard shell, so I prefer this method. I also think it happens to deliver the best results: Plump, well-defined strands that can be eaten as-is or incorporated into other dishes without becoming soggy.
Prep Time 10 minutes
Cook Time 1 hour
Cooling Time 10 minutes
Total Time 1 hour 20 minutes
Author Heather Dessinger 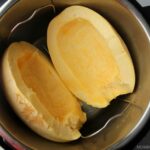 How to Cook Spaghetti Squash in an Instant Pot

Want to make a gluten-free spaghetti in under 30 minutes? The InstantPot the way to go. Because you’re using water to essentially steam it, you’ll want to remove the lid as soon as the cooking time is complete. (Otherwise it will become soggy.)
Prep Time 10 minutes
Cook Time 15 minutes
Total Time 25 minutes
Author Heather Dessinger 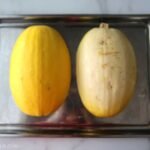 How to Cook Spaghetti Squash in the Oven

In my experience, this method results in spaghetti squash that is a little sweeter than the other methods. However, the strands can become somewhat soggy and difficult to separate if overcooked.
Prep Time 10 minutes
Cook Time 1 hour
Total Time 1 hour 10 minutes
Author Heather Dessinger

You can serve spaghetti squash as the main entree or as a side dish to complement the main course. We’ll get to a few favorite recipes in a bit, but first, there are some simple topping combinations that work perfectly.

Below are answers to some of the most common questions I’ve been asked over the years after sharing various spaghetti squash recipes on my Facebook page.

When is Spaghetti Squash in Season?

Spaghetti squash is one of the popular winter squash varieties, along with acorn, butternut, and pie pumpkin. They’re grown in spring and summer along with other squash varieties, but sold throughout winter and spring because they last longer off the vine than summer squash. According to National Co+Op Grocers, winter squash are harvested from late summer through fall, then “cured” or “hardened off” in open air to toughen their exterior. This curing process ensures the squash will keep for months without refrigeration. Summer squash varieties like zucchini, pattypan, crookneck, zephyr, and cousa have a much shorter shelf life.

What’s the Difference Between Yellow and Orange?

Canary yellow is the traditional color of a mature spaghetti squash, but orange varieties (aka Orangetti) are also popular. While the orange variety is pretty – and pretty tasty in my experience – at least one consumer test showed that more people prefer the flavor and texture of the yellow variety once cooked.

How Long Does Spaghetti Squash Last?

Store cut spaghetti squash in the fridge in a sealed container up to five days. Store uncut squash in a cool, dry pantry up to three months.