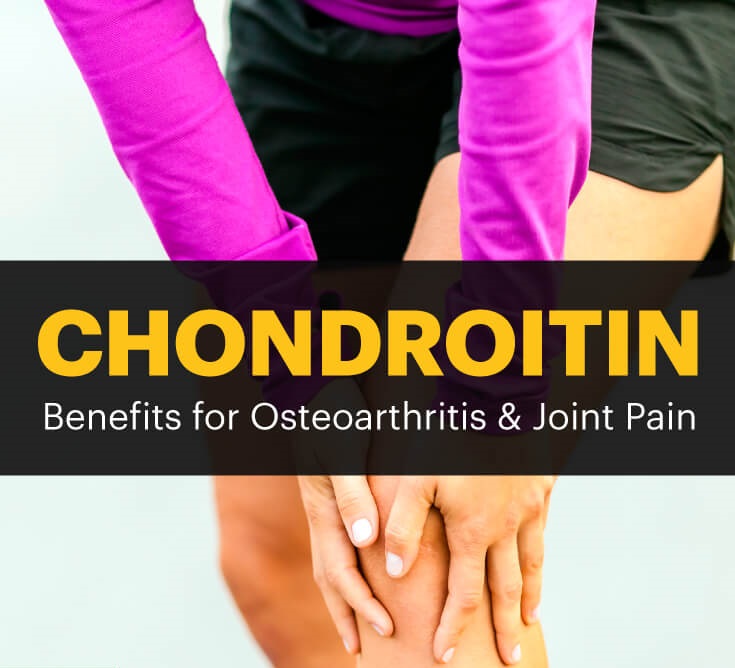 Both our Collagen Ultra and Collagen Complete Supplements
Contain Chondroitin! Chondroitin is one of the most sought after joint-supporting supplements available on the market today due to how it helps rebuild cartilage naturally and boosts recovery of tissue after injury or exercise. Commonly available in formulas containing similar and complimentary supplements like glucosamine and MSM, it’s taken by many people with joint pain, osteoarthritis, and other signs of “wear and tear” due to aging.

These substances are often used together because they have similar mechanisms of lowering inflammation and treating pain — plus they’re considered very safe and pose little risk for side effects. Although not every study has shown that chondroitin is capable of helping everyone who experiences joint pain, many studies do show support for its effectiveness and also safety.

It’s an important structural component of cartilage and one of the key substances that allows joints to withstand pressure. The Natural Medicines Comprehensive Database has classified chondroitin as “possibly effective” for osteoarthritis (and glucosamine as “likely effective”), and many other authorities stand behind its use for fighting joint pain naturally in place of prescriptions. (1, 2)

Chondroitin is a natural substance found in the human body and a major component of cartilage, which helps build connective tissue throughout the body, including those that form joints and the gastrointestinal (GI) tract. Because it works by retaining water, it helps add lubrication and flexibility to tissue and joints.

When found in supplement form, it can either be derived naturally from the cartilage of animals (including cows, pigs or sharks) or man-made. Drinking bone broth is probably the greatest way to obtain both glucosamine and chondroitin at home.

Estimates show that over 27 million adults in the U.S. live with osteoarthritis, which is the most common type of arthritis and degenerative joint disease that’s characterized by the breakdown of cartilage and increased joint pain. Chondroitin sulfate is commonly used to treat pains associated with osteoarthritis, especially forms that affect very susceptible body parts like the knees and hands.

Overall, studies have shown that use of chondroitin tends to cause modest improvements in joint pain over the course of several months, although some people experience even more benefits and more quickly — especially when combining several supplements together and making other changes like eating an arthritis diet to treat symptoms. According to the Arthritis Foundation, on average study participants usually experience about a 10 percent improvement in painful symptoms when using chondroitin compared to placebo. The best results are usually achieved after using a product containing it for three months or more. (4)

Recently, the University of Utah’s School of Medicine conducted the largest-ever clinical study investigating the effects of chondroitin and glucosamine, called “The Glucosamine/Chondroitin Arthritis Intervention Trial (GAIT).” According to reports released by the National Center for Complementary and Integrative Health, GAIT is the first large-scale, multicenter clinical trial in the U.S. to test the effects of the dietary supplements glucosamine hydrochloride (glucosamine) and sodium chondroitin sulfate (chondroitin sulfate) for the treatment of knee osteoarthritis. (5)

Results from another randomized, double-blind, placebo-controlled clinical trial that appeared in Arthritis and Rheumatism tested the effects of chondroitin taken by 162 symptomatic patients with osteoarthritis of the hand. The results showed that patients who experienced chronic hand pain and took 800 milligrams of chondroitin sulfate (CS) daily experienced on average modest pain relief, reduced morning stiffness and improvements in overall functionality within three to six months of regular use.

Researchers also found that the majority of patients experienced no adverse side effects due to chondroitin, which often can’t be said of other painkilling medications that can cause adverse effects like stomach ulcers, dependence, digestive issues, blood pressure problems and more. The researchers’ conclusion was that “CS improves hand pain and function in patients with symptomatic OA of the hand and shows a good safety profile.” (6)

2. Helps with Injury and Exercise Recovery

Chondroitin and glucosamine are also used together to help heal wounds, skin-related defects, inflammation of the skin and even in veterinary medicine. Chondroitin can help the body produce collagen, which is essential for skin health, healing and fighting the effects of aging on the skin.

Treatments made using chondroitin and glucosamine are often used for wound dressing even for severe wounds, plus applied over scrapes, burns and lesions to keep wounds moist and promote faster recovery. (8) Some studies have even found that in patients with burns requiring skin grafting, the use of chondroitin in treatment gels can speed up healing time and help control inflammation significantly.

Chondroitin is a major component of the human extracellular matrix, linking together sugar and protein molecules and serving an important role in maintaining the structural integrity of tissue. Its primary benefit and mechanism of action is stimulating regeneration of cartilage, which is the connective tissue that cushions the ends of bones within joints.

Within chondroitin are tightly packed sulfate groups that form a barrier that can withstand compression, shock and even electrostatic charges that damage tissue. Chondroitin is technically a form of a complex carbohydrate, giving it shock and water-absorbing capabilities and making it crucial for allowing joint/bone movement without friction. This is why the loss of chondroitin from cartilage is a major cause of osteoarthritis that degenerates joints.

It’s also important for forming tissue elsewhere in the body, including the skin, GI tract and the brain. In regard to the the brain’s extracellular matrix, it helps stabilize normal brain synapses and protects the brain from injury. Following trauma to the brain, levels of chondroitin are increased rapidly to help regenerate new tissue in order to replace damaged nerve endings.

Today, chondroitin, especially when taken along with glucosamine, is a popularly prescribed alternative to nonsteroidal anti-inflammatory drugs (NSAIDs), which are prescribed or over-the-counter painkillers used for treating chronic inflammation and pain.

NSAIDs are used daily, or at least very frequently, by millions of patients who deal with chronic pain due to various health conditions. Many experience side effects as a result of using NSAIDs, such as digestive complaints, including low stomach acid, and are not able to take NSAIDs long term. Although very few studies done over a long period of time have directly compared the effectiveness of chondroitin alone with NSAIDs, the two seem to work similarly for lowering bone or joint pain and improving functionality, although chondroitin can take a bit longer to work than NSAIDs.

NSAIDs tend to reduce pain more rapidly (normally within several weeks), but then the effects commonly wear off. At this point the benefits of chondroitin and glucosamine actually start to become much more apparent, since it takes them some time to begin reducing inflammation and stimulating cartilage production. Chondroitin has been studied most in regard to treating osteoarthritis symptoms, but research also shows it might also help treat other concerns like digestive disorders and signs of aging on the skin too.

What is glucosamine, and how is it different than chrondroitin?

Glucosamine is also a natural anti-inflammatory compound found in human cartilage and connective tissue. Technically, glucosamine is an amino sugar that the body produces and distributes wherever tissue is located. It’s naturally abundant in fluids that surround joints and in supplement form is sold for the same purposes as chondroitin sulfate.

Studies have found that glucosamine has cartilage-regenerating effects and boosts the strength and flexibility of joints. Glucosamine sulfate is the form most often used today to treat joint pains and osteoarthritis, which is a combination of glucosamine and mineral salts that the body can absorb easily.

Chondroitin used with glucosamine helps lower symptoms associated with loss of collagen and cartilage, which are found in tendons, joints, ligaments, skin and the digestive tract. These conditions can include tendonitis, bursitis and so on. In healthy people, when cartilage becomes damaged due to overuse, injury or inflammation, new cartilage is normally produced to take its place. Unfortunately, as we get older our ability to regenerate lost cartilage and repair damaged connective tissue becomes less efficient.

In both humans and animals, glucosamine and chondroitin stimulate the production of new cartilage and can also help reduce inflammation in the process. Today, these supplements are available in tablet, capsule, powder or liquid form and can be safely consumed with most medications or other dietary supplements. To date, more research has been done in regard to glucosamine’s benefits, although the two are very often combined for better results. When taken together benefits include:

At this time, there isn’t a daily recommended intake for chondroitin or glucosamine. The GAIT study used these supplements in the following dosages: Glucosamine and Chondroitin Side Effects and Precautions

Although these supplements are very unlikely to cause side effects and can help control your pain naturally, they won’t necessarily work for every person and therefore shouldn’t take the place of your other medications unless you’ve discussed this with your doctor. It seems like these supplements are most helpful when used long term and in combination with other lifestyle factors — like an anti-inflammatory diet, exercise, stretching and stress reduction.

Currently, the American College of Rheumatology does not recommend either for the initial treatment of osteoarthritis, but it does stand behind their use as safe, alternative methods for controlling pain after inflammation associated with osteoarthritis has started to decrease. (9) For the most effectiveness, a brand of high-quality chondroitin that combines several substances together should be taken for at least three months and used in proper doses.

The good news is that these supplements are safe to take even if you’ve had problems with other painkillers. Studies show that using these supplements regularly for up to three years poses little risk for side effects. How much benefit you get from taking them ultimately depends on your starting level of inflammation, the amount of joint deterioration you’ve experienced, your medical history and other lifestyle choices.

The Arthritis Foundation points out that these supplements likely won’t work for all patients, but “for those who take these supplements and who have seen improvements with them, they should not stop taking them. They are safe for long-term use.”