This vegan sticky toffee pudding is nothing short of magical! A plant-based spin on the classic dessert, made with gooey dates. The cake features whole grain flour and uses a creamy, cashew-based sauce in place of traditional toffee sauce.

It’s a combination of my favorite type of dessert (cake) and one of my favorite plant-based ingredients, Medjool dates. Plus a cashew maple sauce that tastes surprisingly like toffee, but is just a little more wholesome.

It comes as no surprise to me that I love this vegan sticky toffee pudding as much as I do. I’m just amazed that it took me so long to try it!

What is sticky toffee pudding?

I have a lot of respect for traditional desserts. Watching all seasons of The Great British Bake Off more times than I can count has only made me honor and respect classic sweets more.

So it’s not my style these days to mess with tradition too much. I hesitated to make some of the modifications that I made to this recipe, especially the cashew sauce (more below).

But sometimes it’s worth experimenting with something a little risky and different. I love the way this recipe came together, unusual twists at all. I can’t wait to make it again, and again, and again.

The process of making this cake is simple. You begin by soaking a cup and a half of pitted, chopped medjool dates in boiling water, along with a teaspoon of baking soda.

The baking soda helps to soften the dates. After twenty minutes of soaking, they’re gooey and melty-textured. They turn an otherwise simple cake batter into a dark, sweet, caramel-tasting delight.

Vegan sticky toffee pudding can be baked in ramekins, which is how I chose to serve it. It can also be baked in a round baker — one and a half or two quarts would work well. An eight-by-eight square baking dish can be used if you don’t have a round one or ramekins.

After the pudding bakes, you invert it and cover it with sauce. That could be the maple cashew sauce that I used. It could also be date syrup or a store-bought vegan caramel sauce (there are some made with coconut milk).

If you want to take the sticky toffee pudding over the top, you can add vegan vanilla ice cream as well as sauce.

The best dates for baked pudding

I recommend using pitted, medjool dates in the pudding if you can find them. Their texture will be perfect for the gooey, sticky cake.

If you can’t find medjool dates, you can substitute deglet noor. Just give them an extra ten minutes of soaking time, as they’re not quite as naturally soft as medjool.

In the hopes of staying true to tradition, I tried this recipe with regular vegan toffee sauce. Plus a homemade vegan butterscotch sauce. It was a good excuse to learn about the differences between caramel, butterscotch, and toffee. But in the end, I took a different approach.

In spite of having a robust sweet tooth, I found the toffee sauce to be too sweet on top of the date-filled cake. Not to mention a little oily from the vegan butter.

Maybe I just need to perfect my vegan toffee. But in the meantime, I wondered what it would be like to make a sweet sauce with my beloved, all-purpose cashew cream. I think cashews have a buttery taste, and I’ve also found that maple syrup + vanilla is—for me—evocative of caramel flavor.

So, I experimented. I heated cashew cream with maple syrup, vanilla, and a pinch of salt. The resulting sauce is heavenly. It tastes like a cross between toffee sauce and melted ice cream, so it’s more traditional than it might seem.

I use a mix of all purpose and sprouted, whole wheat flour in this recipe.

Why? Because the nutty, complex flavor of whole wheat flour works really nicely with the sweetness of the dates.

My sprouted grain flour of choice is the organic, sprouted whole wheat flour from One Degree Organics. As many of you know, I love this brand for its transparent sourcing and the quality of its own grain products. One Degree Oats are mainstays in my breakfast routine, and I love to use the sprouted wheat and spelt flours in baking.

Why sprouted? Sprouting may help to make the nutrients in whole grains more bioavailable. I also think that sprouted grains taste a little sweeter than their un-sprouted counterparts.

This vegan sticky toffee pudding is the type of dessert that’s best while it’s warm. But I’ve had success storing the leftovers, especially since I’ve made it a few times now.

After you bake and release the puddings from their ramekins, allow them to cool completely. Then, store them in airtight containers till you’re ready to cover them in cashew sauce.

Speaking of that, the cashew sauce can be kept in an airtight container in the fridge for up to four days. Reheat it in a saucepan while stirring it gently. 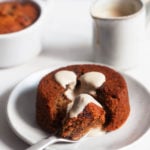 For the creamy cashew sauce

The recipe makes six servings, but they’re generous servings! Especially for a sweet, sticky cake like this. One pudding could easily be enjoyed by two people.

That’s one of many reasons that vegan sticky toffee pudding is a good Valentine’s Day recipe. Make it to share with a loved one, if you’re lucky enough to be quarantining with someone you care about.

Or, make the recipe and enjoy it as a gift to yourself. It’s one of the nicest dessert gifts I can think of, and I hope you’ll enjoy it.

This post is sponsored by One Degree Organics. All opinions are my own. Thanks for your support!