After recovering from the the good kind of pain at the end of November last year, I developed the plain-old kind of pain that is in no way good: an intense, searing pain of a likely cervical radiculopathy that prompted me to go to the ER one fine December Saturday after leading a children’s Nativity re-enactment rehearsal. My neurological symptoms were getting increasingly worse, as was the pain, despite stopping running completely for weeks, sparing my right side from any kind of lifting or serious use, taking around-the-clock high dose NSAIDs, and even wearing a lovely soft cervical collar for a week (fantastic way to garner sympathy and/or jokes from colleagues).

The ER physician assigned to me was an older man who showed absolutely zero empathy, compassion, or patience. You know when you can feel someone’s impatience with your history-sharing, who just wants you to get to it? I told him I was a physician – not sure whether his bedside manner was because of that fact or in spite of it. I had plain films done showing cervical degenerative changes (I had never felt quite so old) and his plan for me was a) switch to naproxen from ibuprofen; b) reassurance that it would get better (delivered by someone without a compassionate approach, this felt tin-hollow); c) follow-up with PCP the next week. This felt like a wholly inadequate plan to me. I suggested a medrol dose pack which he agreed to.

The medrol dose pack was a temporary godsend. It worked within a day to drastically improve my pain. It was amazing! I felt almost normal again. Once the pack was done, though, the pain returned, in some ways worsened. Dealing with this pain – chronic, unclear end date – was humbling and deeply frustrating.

I have always thought of myself as a physically strong person. This has been part of my self-identity. On the playground, I used to win arm wrestling matches against boys. In high school, I was a cheerleader “base” and held girls’ feet on my shoulders and bench-pressed them until my arms were extended. (If I did that now, I’m sure multiple discs would herniate simultaneously. Actually, maybe that’s why my neck imaging looks the way it does.) This injury, occurring after no single traumatic moment upended that self-image. For awhile, during the worst of it, I cringed as my seven year old came in for a hug from my right side.

After a lot of physical therapy and time (probably most important), the pain lost its hard edge and now has settled to a stiffness and soreness that I don’t always notice. A couple of months ago, I started running gingerly again, and a couple of weekends ago, I ran my first race in almost a year. It felt like it usually feels constitutionally-speaking: horrible during, fantastic afterwards, and I’m ready for the next one.

I’m grateful to be mostly recovered. I have new appreciation for those with chronic pain. And most importantly, I’m running again and feeling like myself. 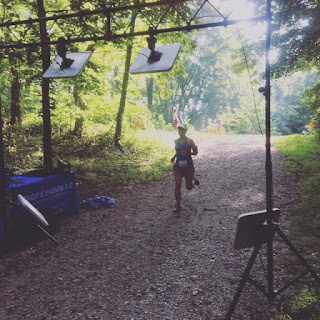