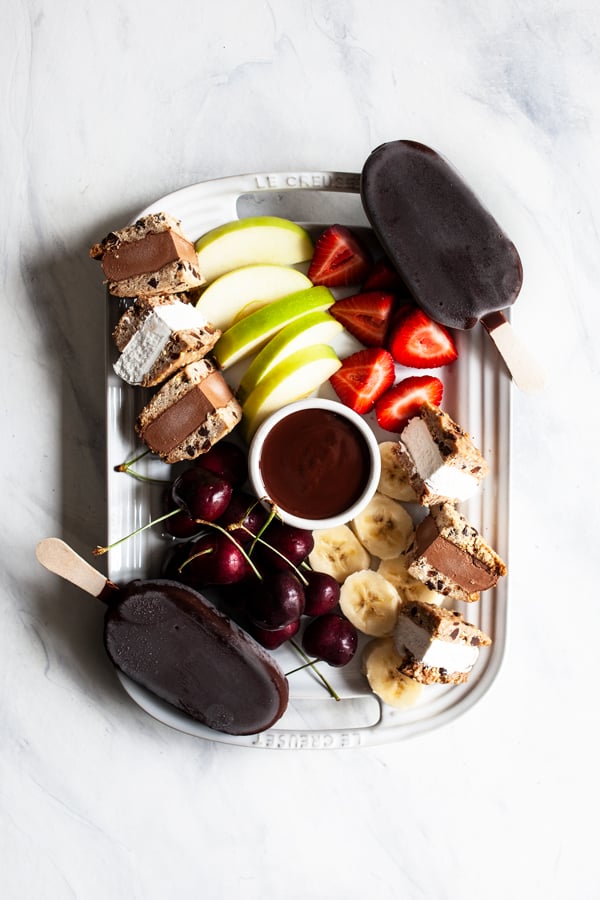 Last summer New York was every bit as hot and humid as it is now, but for some reason, I was busy baking up a storm. Galettes, buckles, lemon cake, you name itâ€”I had my oven mitts ready for it.

I happen to have made cobbler a few weeks ago, when it was still unseasonably cool, but I have a feeling this will be a summer of no-bake desserts. The heat has been getting to me more than usual, and if I do turn my oven on, I’d like for it to be for something that will show up in a few of my meals, rather than a single batch of treats. 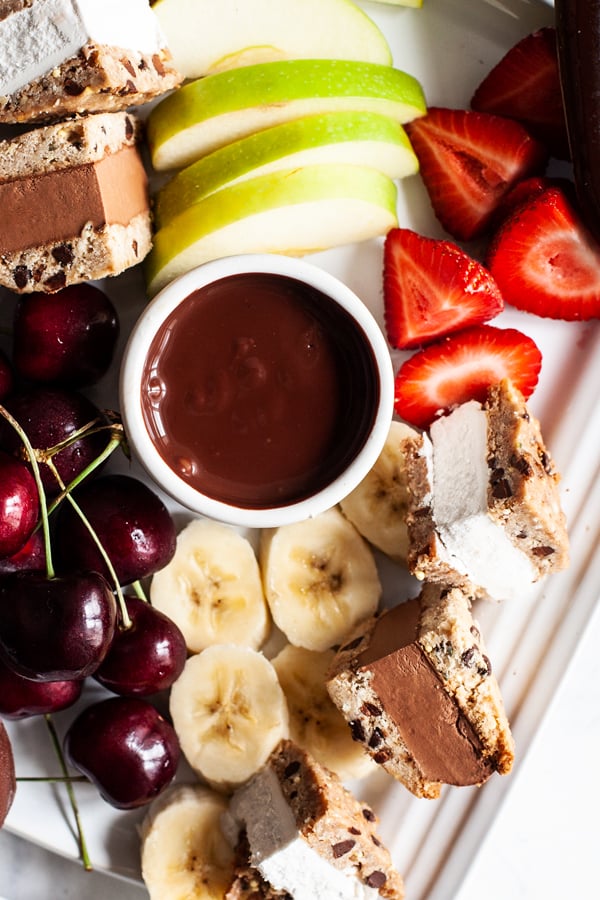 It’s a collection of sweets, actually, which makes it all the better for entertaining or gatherings with friends. If you’re looking to have folks overâ€”folks whose dessert preferences might span a wide range of health needs, tastes, or strong chocolate/vanilla preferencesâ€”it’s a particularly low-stress and fun option.

The platter is a “semi-homemade” situation: you slice the fruit and make the fondue, which takes only minutes. The frozen treats here are courtesy of the folks at Luna & Larry’s Coconut Bliss. Coconut Bliss is one of the very first dairy-free ice creams that I truly loved. I was amazed at how rich and creamy it was: until the point the vegan ice creams I’d sampled had been light and even a little icyâ€”more like chocolate or vanilla sorbet than traditional ice cream as I remembered it. Coconut Bliss was every bit as decadent as the stuff I’d grown up with, and it became an instant hit with me (and my mom, who remains a big fan). 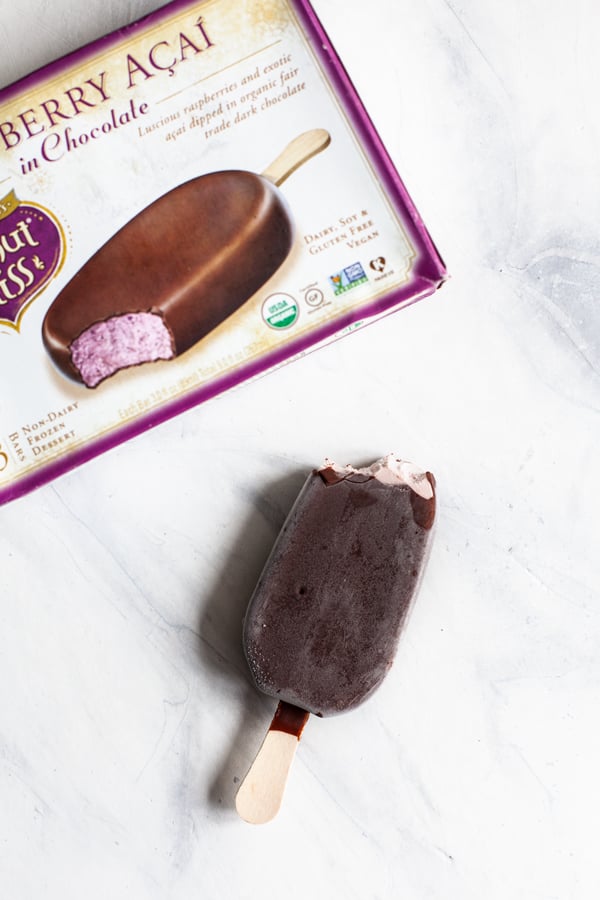 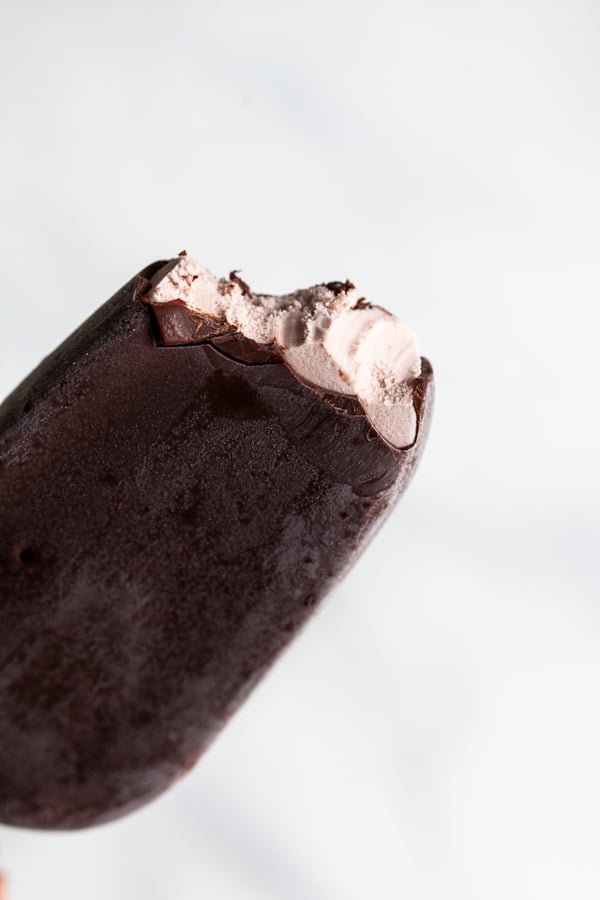 If I had to choose between a bar and a cookie sandwich, though, I’ll take a cookie sandwich anytime. The Coconut Bliss sandwiches feature a hemp seed chocolate chip cookie that’s a serious treat in its own rightâ€”just like the chocolate in the bars, it’s not just decorative or an afterthoughtâ€”and it’s gluten free as well as vegan. 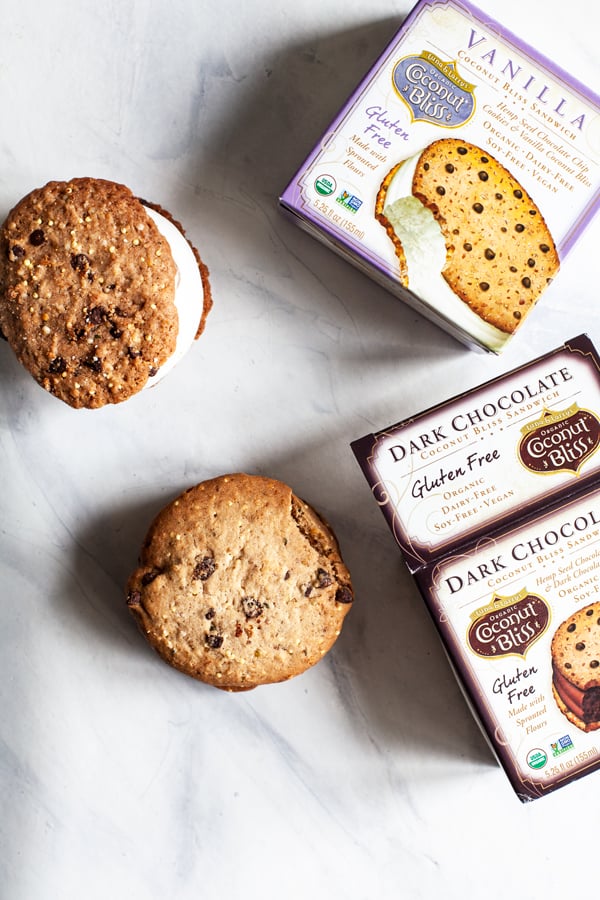 As I was putting this platter together it occurred to me that the Coconut Bliss desserts especially good for this kind of presentation because they’re so delightfully rich: bite-sized portions really do feel satisfying.

The rest of the platter is a combination of seasonal fruit and an easy homemade fondue. I used a mix of berries, cherries, and applesâ€”all in season right nowâ€”and bananas, which I love to pair with chocolate anything. The fondue is so simple: dark chocolate (I recommend really darkâ€”70% or higherâ€”or a vegan bittersweet baking bar), non-dairy milk, a little sugar, a pinch of sea salt. A shot of espresso or a pinch of vanilla definitely wouldn’t hurt, but sea salt and chocolate are more than enough to make me very happy. 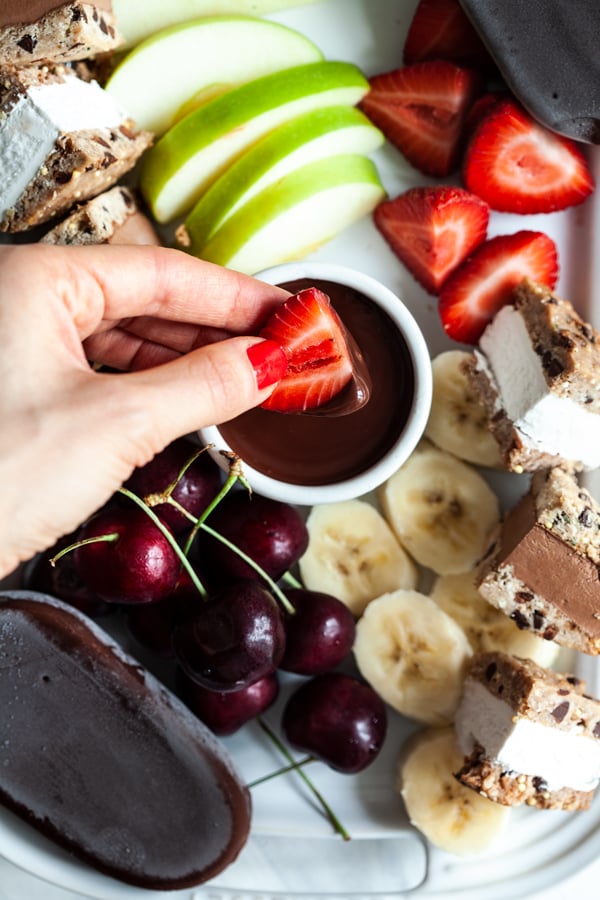 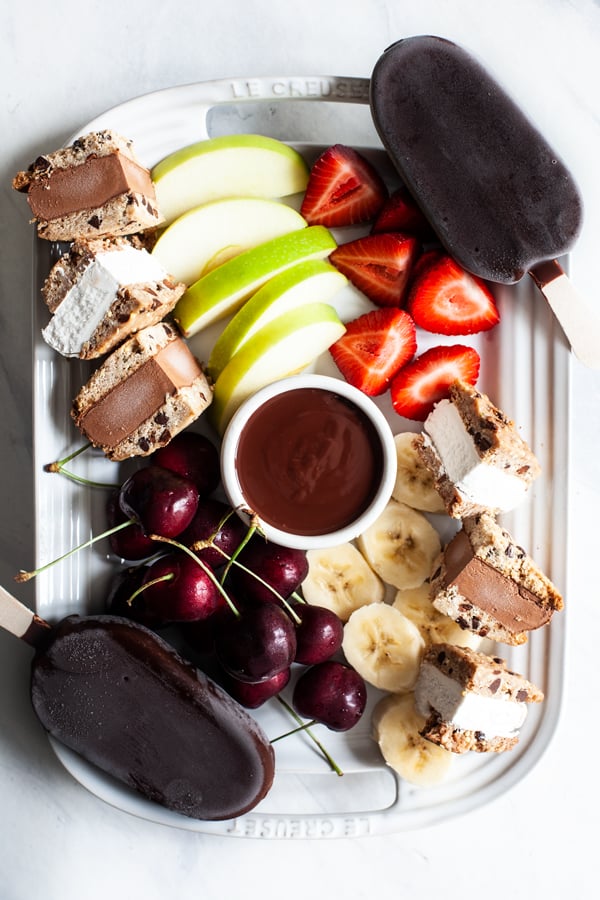 This is such a no brainer dessert: the fresh fruit alone is a delight at this time of year, and more so when dipped in the chocolate mixture. The frozen treats make it a little more festive and are a nice contrast to the warm fondue. Something for everyone, right?

And of course you can substitute or add some of your own favorite frozen vegan treats, orâ€”if you’re braver than I am about baking right nowâ€”a homemade cookie, brownie, or whatever’s calling to you.

Wishing you so much sweetness in these summer months. Happy weekend, and I’ll see you for the usual roundup.

This post was sponsored by Luna & Larry’s Coconut Bliss. All opinions are my own, and I’ve long been a fan of these delicious vegan ice creams. Thanks for your support!